Enjoy the sparkling waves, endless sea and blue skies along the coast

At the edge of inspiring waters, Villa Orabelle enchants sea-lovers searching for peaceful holidays in Dubrovnik. Elevated on a spectacular cliff overlooking the Miramare Bay, two rustic stone houses with pool offer an oasis of peace away from tourists and the hustle of everyday life but is still in a close vicinity of the mesmerizing medieval Dubrovnik Old Town.

Just you and the sea

This luxurious private property, featuring sixteen rooms and two suites, along with two outdoor pools, provides a unique setting to relax, while enjoying the captivating view of the Adriatic Sea that never fails to astound.

Boost your energy with a cup of coffee and buffet breakfast at the cosy sea-view restaurant with a terrace. Discover a new level of rejuvenation on the outdoor relaxing area with a pool and lounge facilities, surrounded by a lush Mediterranean garden. Moreover, if you would like to reserve a parking space or book airport transfer, private sightseeing tours or day-trips, feel free to contact us anytime.

We’re also proud to be an EV friendly Villa. Our parking is equipped with electric vehicle charging station so you don’t need to worry about driving around to find charging stations.

Perched on a steep cliff overlooking the Adriatic Sea and surrounded by a unique natural environment, Villa Orabelle is only a 15-minute walk from Dubrovnik’s Old Town. En route to the Old Town, you will pass Boninovo with breathtaking views over the sea all the way to the Pile Gate.

This unique villa in Dubrovnik with a pool is surrounded by beaches – the famous pebble Miramare Beach and several untamed rocky beaches, coupled with concrete plateaus just beneath the steep cliff, on which the villa stands. The crystal clear turquoise sea, Dubrovnik’s sublime sunrises and plenty of shade in the afternoon – these are just a few of the reasons why the Miramare Beach is so popular. This particular beach in Dubrovnik boasts a setting and an ambiance that is so comfortable and inspiring it makes you feel you want to read a good book or maybe even write one. You can also watch the locals play water polo or leap from the cliffs. 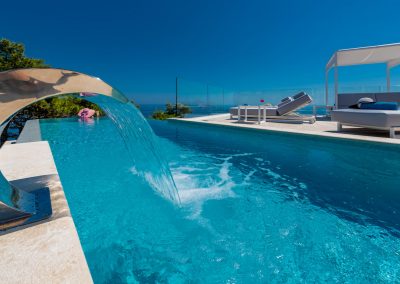 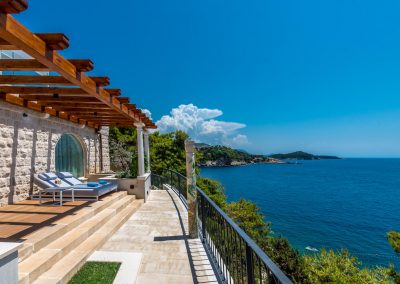 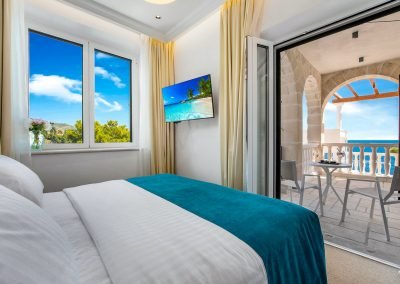 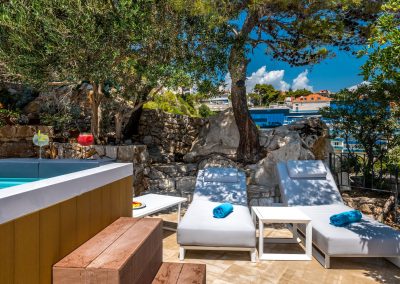 The stone ‘pearl’ with a vibrant history

Dubrovnik truly lives up to its moniker – “The Pearl of the Adriatic”. This unique old town, surrounded by its magnificent stone walls, was placed on UNESCO’s list of world heritage sights in 1979. With its amazing Gothic, Renaissance and Baroque buildings, Dubrovnik has become one of most popular tourist destinations in Europe.

For centuries, it was home to the Republic of Ragusa, a small but powerful maritime city-state, known as the first country to recognize the independence of the United States of America and one of the first governments in the world to abolish slavery. Perhaps the best word to describe the Dubrovnik Republic would be “libertas” meaning “freedom”. That used to be the motto of this amazing small republic and you can still see it written on all the flags fluttering within the city walls, along with the image of its protector, St. Blaise.

Nowadays, Dubrovnik is well known for hosting some exciting big-name blockbusters. A number of movies and television shows were recently filmed in and around the Old Town. For instance, Dubrovnik is the main filming location in Croatia for King’s Landing  in The Game of Thrones series; it was turned into Nottingham for Leonardo DiCaprio’s Robin Hood and transformed into Canto Bight, the casino planet, for the filming of Star Wars: The Last Jedi, just to name a few.

BOOK YOUR HOTEL IN DUBROVNIK

We are well prepared with protocols focusing on health and hygiene in all aspects of our operation. Croatian Ministry of Tourism has granted Hotel Lero a Safe stay in Croatia label, which ensures that the prescribed epidemiological measures and health safety recommendations have been taken at the location. Moreover, if you need antigen testing before traveling back to your country, we can organise one for you in the hotel. Along with doing everything to keep you safe, we are waiting to welcome you back with warmer and brighter smiles.

Do you have any wishes or questions?

You can find out more about which cookies we are using or switch them off in settings.

This website uses cookies so that we can provide you with the best user experience possible. Cookie information is stored in your browser and performs functions such as recognising you when you return to our website and helping our team to understand which sections of the website you find most interesting and useful.

Strictly Necessary Cookie should be enabled at all times so that we can save your preferences for cookie settings.

If you disable this cookie, we will not be able to save your preferences. This means that every time you visit this website you will need to enable or disable cookies again.

This website uses Google Analytics to collect anonymous information such as the number of visitors to the site, and the most popular pages.

Please enable Strictly Necessary Cookies first so that we can save your preferences!